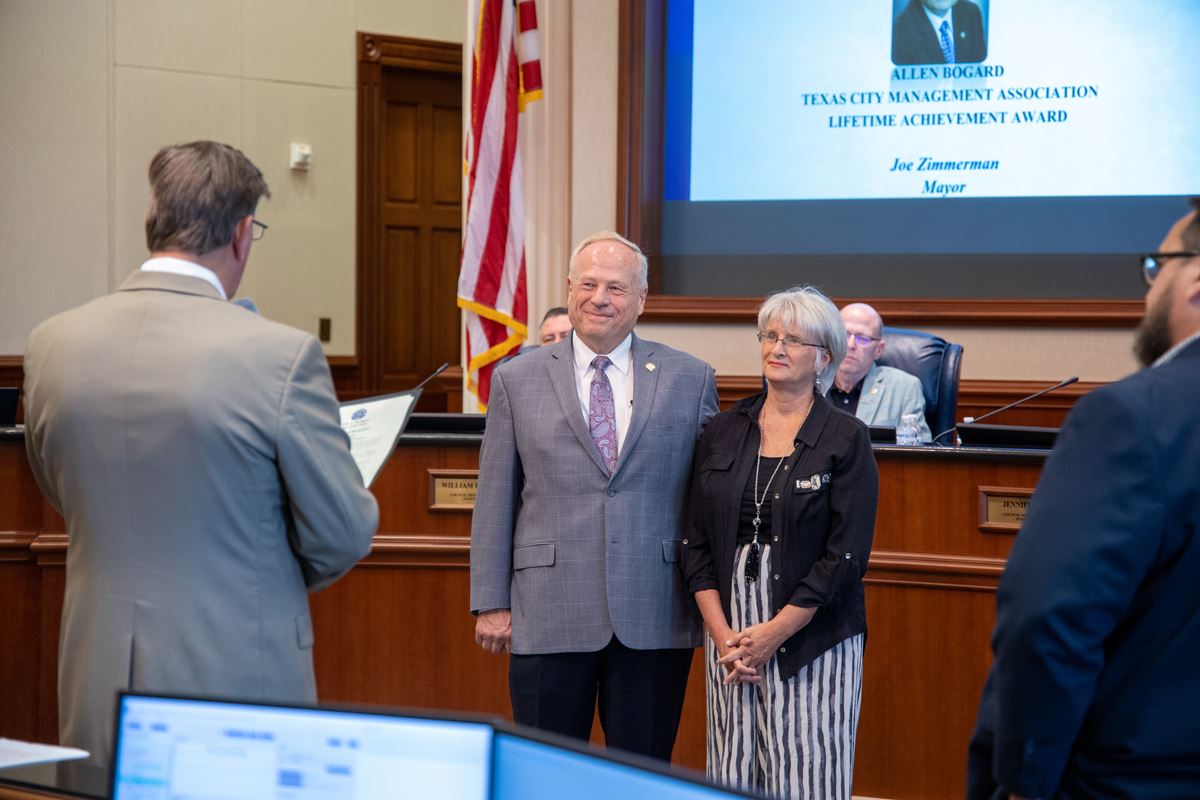 Bogard’s 44 years of public service included 25 in Sugar Land, with 19 as its city manager and past roles in Keller, Winnsboro, Plano and Dallas. He retired Jan. 31, 2020.

His commitment to leaving the city in as good or better condition than he received it from his predecessor, David Neeley, was evidenced by the city’s high level of service and financial strength, an accomplishment confirmed by Sugar Land’s AAA bond rating.

Upon his departure, he credited the city’s accomplishments to effective, ethical elected leaders and champion employees. More recently, he credited his Lifetime Achievement Award to a community that has a strong commitment to good government – a multi-generational commitment to good government. He said that commitment allowed for professional management to exist and to play the important role of implementing the vision City Council establishes.

The selection of Allen for this award and the others he’s received places him in the rarest of company,” said City Manager Michael W. Goodrum, who credits Bogard as an influential mentor who guided his career. “It’s really a testament to his singular focus as a leader who was passionately dedicated to creating community and developing people. He instilled in all of us that we’re here to serve our community. We’ll forever be in debt to Allen for the opportunity to serve our residents and make a difference in our community.”

During Bogard’s two decades as chief executive, Sugar Land became known as a city dedicated to doing things differently -- a cut above -- through a commitment to bold and thoughtful thinking.

His tenure as city manager in Sugar Land saw the organization work to implement the City Council’s vision for Sugar Land, and contributed to the city being a nationally recognized beautiful and inclusive community with growing economic, cultural, and entertainment opportunities.

The city more than doubled in population under Bogard’s leadership and saw the development of Sugar Land Town Square, First Colony Mall, Constellation Field, the Smart Financial Centre at Sugar Land, the University of Houston at Sugar Land and the Houston Museum of Natural Science at Sugar Land.

His leadership ensured the city remains safer than ever before, with a strong economy that enables the city to deliver the high level of services citizens expect while maintaining one of the state’s lowest tax rates.  He worked tirelessly to focus on developing future leaders within the organization.

The Sugar Land City Charter identifies the city manager as the chief executive officer. The manager is hired to serve City Council and the community and provides the professional expertise necessary to administer local government projects and programs.

In 2005, his professional leadership and accomplishments were recognized when he received the “Administrator of the Year Award” given by the Texas City Management Association in recognition of his significant contributions to local government. The Texas City Management Association recognized him in 2011 as “Mentor of the Year” for developing talent, training future leaders and implementing programs focused on succession planning and professional development.

In 2019, the International City/County Management Association (ICMA) recognized Bogard with the ICMA Award for Career Excellence in memory of Mark E. Keane for his contribution to the development of Sugar Land into a destination city with a robust economic development program and reputation for strong financial management, and recognition as one of the best and safest places to live in the country. The award was established in memory of former ICMA Executive Director Mark E. Keane. It recognizes an outstanding local government administrator who has enhanced the effectiveness of government officials and consistently initiated creative and successful programs.