The City of Sugar Land serves drinking water that meets all EPA and Texas Commission on Environmental Quality regulation requirements.The City operates three independent water systems that serve the Riverpark, Greatwood, and New Territory neighborhoods and the Main system that serves the rest of Sugar Land. The analysis for the Water Quality Reports are made by using the data from the most recent EPA-required tests and is presented in the following downloadable documents. We hope this information helps you become more knowledgeable about our drinking water. Printed copies of the Water Quality Report can be requested from the Public Works Department 281-275-2900. 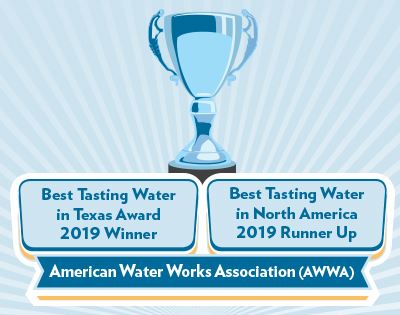 The City of Sugar Land’s water was selected as the Best Tasting Water in the United States and the second-best tasting water in North America on June 11, 2019, at the American Water Works Association’s (AWWA) Annual Conference and Exposition (ACE19).

The primary minerals in drinking water that cause hard water deposits are calcium and magnesium. The City currently uses well water which can vary in water hardness from well to well. The City’s Main Water System also uses surface water from Oyster Creek and the Brazos River. This treated surface water is blended with the groundwater before being distributed to customers. Therefore, it is best to consider the system as a whole and to look at the hardness as a range in order to capture the full potential:

Customers may contemplate getting softener based on their desired aesthetic qualities of water. Hard water can cause crusty white to off-white build up around faucets, shower heads, toilet bowls, and sinks. This deposit can be removed with products designed for this function that can be purchased at local stores.

To learn about future public meetings concerning our drinking water or to request to schedule one, call us at 281-275-2900.